The chief digital officer movement has been in high gear for several years now. According to The CDO Club, the number of CDOs globally will reach 2,000 by the end of 2015, up from fewer than 100 in 2011. Though by no means the only path to digital-enablement, many companies have installed CDOs as part of an company-wide digital strategy.

And 2015 may very well prove to be the tipping point for the chief digital officer movement, with global stalwarts like Cisco, GE, Michelin, Under Amour and Zurich – among dozens of other high profile brands – adding digital chiefs to their C-level ranks. Indeed, over the past 12 months, annual revenues attached to companies with corporate-level CDOs in place crossed the trillion dollar mark.

But where do companies and recruiters go to find chief digital officers? While higher education institutions have launched executive training and undergraduate degree programs in relevant areas like digital marketing and digital transformation to help train leaders, the category has a long way to go catch up to more mature disciplines in areas such as finance and general management. So where are all of these chief digital officers coming from?

To find answers to this question, ChiefDigtalOfficer.net analyzed 79 chief digital officers at corporations from around the world. We focused on sizable companies – most have multinational operations – and excluded professional services firms and ad agencies, which are often hired to help accelerate an organization’s digital adoption. The resulting data set included a group of companies with nearly $1.5 trillion in annual sales and representation across very large ($25+ billion in annual sales, 19 companies), large ($5-$25B, 21), medium ($1-$5B, 21), and small sizes (under $1B, 18). Industry categories represented in the analysis included: apparel, entertainment, financial services, insurance, pharmaceuticals, publishing, retail and technology (with at least two and as many as 15 companies from each sector).

More than half (55%) of chief digital officers in our analysis had backgrounds in either technology or marketing, while nearly 30% had recently managed a line of business or the digital channel. 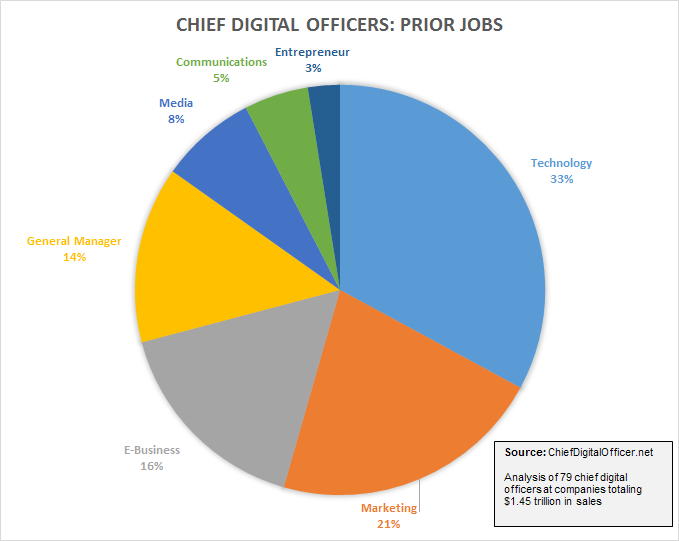 While backgrounds in marketing and technology lend themselves naturally to the CDO job description — considering a big part of the assignment often involves bridging those two functional areas of a company — general management, e-business, or even entrepreneurial experience (the three areas combine to represent 33% of the sample) are also valued by large companies for the job. In his recent analysis of CDO trends, based on research conducted in partnership with ChiefDigitalOfficer.net, Gerry Murray of IDC explained the myriad roles of many big company CDOs, who “are expected to invent the digital growth engines of the future…bring new business models based on data services, sharing economies, and mobility…the CDO role spans a spectrum of overlapping responsibilities…and drives innovation and raises the digital IQ of the entire enterprise.”

Indeed, GE’s Chairman Jeffrey Immelt proclaimed the company’s intent to “transform itself to become the world’s premier digital industrial company” when he announced the new CDO of GE Digital, Bill Ruh. Executing on such a directive certainly requires skills above-and-beyond any one functional area, whether it be marketing, IT, or product development. More commonly, though, CDOs are often called upon to coordinate corporate resources and get the organization moving in the same digital direction, which also necessitates a multi-talented executive. This example of using a CDO to digitally transform helps organizations avoid what George Westerman of MIT calls “fashionista behavior”, or a strategy the might “look beautiful on the outside but there’s not have a lot going on behind the scenes”.

Six insurance companies with more than $30 billion in annual sales currently have chief digital officers, and most (5-of-6) were hired for the job over the past 24 months. Among the very largest companies with CDOs, the insurance industry sector has the most international representation, with half the group located outside of the U.S.

Conversely, traditional technology companies have been slow to embrace the CDO, with only two large companies (SAP, Cisco) installing a digital chief, and both within the past year. Likewise, only a small number of the largest energy companies have installed digital chiefs – oil and gas concerns Total and Engie, both headquartered in France, have CDOs while to date no utilities companies have embraced the CDO movement.

Though many question the long-term viability of the chief digital officer role in the C-suite, the short-term future seems favorable for the role, given how many organizations around the world continue to struggle with digital transformation, are fearful of being “Uber-ized” – or both. And this bodes well for not only for well-placed and talented marketing and IT executives who understand digital forces, but also for the less-obvious-but-equally coveted candidates whose general management and entrepreneurial experiences have been deemed equally qualified for the CDO spot by companies around the world.

Tim Bourgeois is the founder of ChiefDigitalOfficer.net, a global community of senior digital professionals. For information about our advisory, brand promotion, and talent management solutions, email Tim at tbourgeois@chiefdigitalofficer(dot)net or call 617.517.0066.